Reproduction (or making a baby) is a simple and natural experience for most couples. However, for some couples it is very difficult to conceive. Male infertility is diagnosed when, after testing of both partners, reproductive problems have been found in the male partner. Infertility is a widespread problem. For about one in five infertile couples the problem lies solely in the male partner (male infertility).

How does the male reproductive system work? 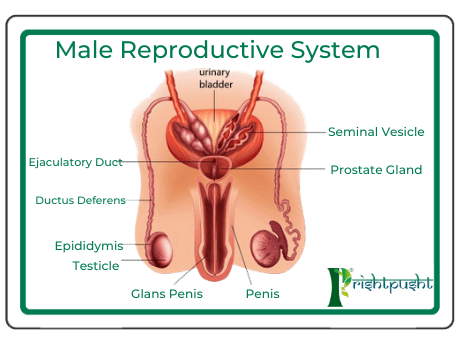 The male reproductive tract is made up of the testes, a system of ducts (tubes) and other glands opening into the ducts. The testes (testis: singular) are a pair of egg shaped glands that sit in the scrotum next to the base of the penis on the outside of the body. Each normal testis is 15 to 35ml in volume in adult men. The testes are needed for the male reproductive system to function normally.

Is the medical condition of a male not having any measurable level of sperm in his semen. It is associated with very low levels of fertility or even sterility, but many forms are amenable to medical treatment. In humans, azoospermia affects about 1% of the male population and may be seen in up to 20% of male infertility situations.

Classification :Azoospermia can be classified into three major types as listed. Many conditions listed may also cause various degrees of oligospermia rather than azoospermia.

azoospermia : In this situation the testes are abnormal, atrophic, or absent, and sperm production severely disturbed to absent. FSH levels tend to be elevated (hypergonadotropic) as the feedback loop is interrupted. The condition is seen in 49-93% of men with azoospermia.Testicular failure includes absence of failure production as well as low production and maturation arrest during the process of spermatogenesis.

Causes for testicular failure include congenital issues such as in certain genetic conditions (e.g. Klinefelter syndrome), some cases of cryptorchidism or Sertoli cell-only syndrome as well as acquired conditions by infection (orchitis), surgery (trauma, cancer), radiation,or other causes. Mast cells releasing inflammatory mediators appear to directly suppress sperm motility in a potentially reversible manner, and may be a common pathophysiological mechanism for many causes leading to inflammation. Generally, men with unexplained hypergonadotropic azoospermia need to undergo a chromosomal evaluation.

Ejaculatory disorders include retrograde ejaculation and anejaculation; in these conditions sperm are produced but not expelled.

Medicinal Treatment: Various herbs are known for their effects in increasing the sperm count of the patients e.g. Muslisafed, Munjatak, Makkhan, Ashwagandha, Shatavari, etc. Along with the herbs there are various classical combinations which are very helpful for treating this condition like Makardhwajwati, Suwarna Siddha Makardhwaj, ShilajityadiWati , etc.

Ayurvedic Panchkarmatherapies : A special panchkarma procedure known as Uttar basti is very helpful for this condition, Uttar basti should be given under the supervision of a trained ayurvedic doctor only.

Refers to semen with a low concentration of sperm and is a common finding in male infertility. Often semen with a decreased sperm concentration may also show significant abnormalities in sperm morphology and motility (technically “oligoasthenoteratozoospermia.

Diagnosis : The diagnosis of oligospermia is based on one low count in a semen analysis performed on two occasions. For many decades sperm concentrations of less than 20 million sperm/ml were considered low or oligospermic, recently, however, the WHO reassessed sperm criteria and established a lower reference point, less than 15 million sperm/ml, consistent with the 5th percentile for fertile men.Sperm concentrations fluctuate and oligospermia may be temporary or permanent.

Pre-testicular factors :- Refer to conditions that impede adequate support of the testes and include situations of poor hormonal support and poor general health including:

Hypogonadism due to various causes

In about 30% of infertile men no causative factor is found for their decrease in sperm concentration or quality by common clinical, instrumental, or laboratory means, and the condition is termed “idiopathic” (unexplained). A number of factors may be involved in the genesis of this condition, including age, infectious agents ( such as Chlamydia trachomatis), Y chromosome microdeletions, mitochondrial changes, environmental pollutants, and “subtle” hormonal changes.

AYURVEDIC TREATMENT: The only difference is that lesser number of medications are required as compared to azoospermia. The results are very quick to come. At the same time panchkarma treatment is often not required.

As is the case with women, lack of desire in men can be of either physical or psychological origin.

Abuse of drugs such as cocaine.
Any major disease such as diabetes.
Obesity -quite common; slimming down will often help.
Anaemia -unusual, unless the man has been bleeding for any reason.
Hyperprolactinaemia -a rare disorder where the pituitary gland produces too much of the hormone prolactin.
Low testosterone level – contrary to what many people think, this is rare, except in cases where some injury or illness has affected the testicles.

Ayurveda, libido is directly dependent upon the amount of “Shukara Dhatu” in our body. Ayurveda believes the body to be made up of seven dhatus. Rasa, Rakata, Mansam, Medam, Aasti, Maaja, Shukaram. It is believed that the diet we take is acted upon by the digestive fire of our body and AaharRasam is formed from the useful part of our food while the waste is thrown out of our body as the stool. Now this AaharRasam is acted upon by various types of metabolic fires leading to the formation of Rasa Dhatu and from there onwards uptoShukara Dhatu Respectively. If the amount of Shukra Dhatu decreases in the body due to AnulomaKshayam( i.e. due to improper nutrition or due to disturbances in the metabolism of the body) or due to PratilomaKshayam (due to excessive masturbation or due to excessive indulgence in intercourse) then there occurs a loss of libido. Hence to improve the libido, we require to check this decrease in amount of Shukra Dhatu of the body. Various herbs as well as metallic preprations are helpful in improving the amount of shukra dhatu in the body and thus help to improve the libido.

A penile erection is the hydraulic effect of blood entering and being retained in sponge-like bodies within the penis. The process is often initiated as a result of sexual arousal, when signals are transmitted from the brain to nerves in the penis. The most important organic causes are cardiovascular disease and diabetes, neurological problems (for example, trauma from prostatectomy surgery), hormonal insufficiencies and drug side effects. Some conditions like hydrocele and varicocele can also cause erectile dysfunction.

A hydrocele is a painless build-up of watery fluid around one or both testicles that causes the scrotum or groin area to swell. This swelling may be unsightly and uncomfortable, but it usually is not painful and generally is not dangerous. Although hydroceles are common in new-borns, they can also occur at any age in later life. Hydroceles are needed to be treated only when they cause pain or embarrassment or when they decrease the blood supply to the penis, causing erectile dysfunction problems. If the hydrocele gets larger or causes discomfort, surgery to remove the hydrocele (hydrocelectomy) is done in mainstream medicines.

Psychological impotence is where erection or penetration fails due to thoughts or feelings(psychological reasons) rather than physical impossibility; this is somewhat less frequent but often can be helped. Notably in psychological impotence, there is a strong response to placebo treatment. Erectile dysfunction can have severe psychological consequences as it can be tied to relationship difficulties and masculine self-image generally.

AYURVEDIC TREATMENT: Various herbs are known for their effects in increasing the chances of concetion in the patients e.g. Muslisafed, Munjatak, Ashwagandha, Shatavari, etc. Along with the herbs there are various classical combinations which are very helpful for treating this condition like Makardhwajwati, Suwarna Siddha Makardhwaj, ShilajityadiWati, etc.

Ayurvedic Panchkarma Therapies: A special panchkarma procedure known as Uttar basti is very helpful for this condition, Uttar basti should be given under the supervision of a trained ayurvedic doctor only.